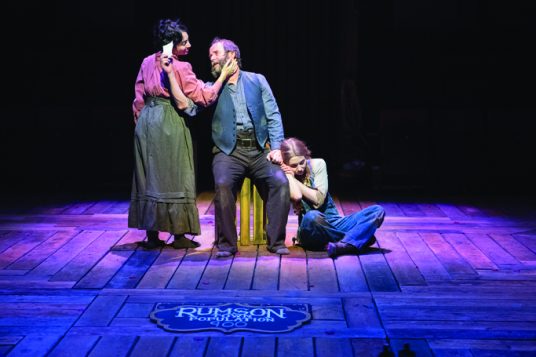 The Everyman Rep is back. Following a storming first season, opening last year with the highly acclaimed Fiddler on the Roof, this year they’ve decided to stage another old schooler in Lerner & Loewe’s Paint Your Wagon. And what a production it is too. So good, I’m On My Way, There’s A Coach Comin’ In and Hand Me Down That Can o’Beans steadfastly refuse to leave my head!

Ticking all the boxes on a stage almost entirely bereft of setting, the 14 strong cast more than make up for a lack of numbers that usually count 40+ in other productions. The sheer energy, joy and enthusiasm that rolls in waves becomes immediately infectious, so it’s almost obligatory to beam with pleasure from the off.

Gemma Bodinetz hasn’t missed a single trick in delivering the comedy moments, of which there are many. Little asides abound as much as the main drivers and it’s testament to the director’s attention to the minutest of details that this show is such a winner. She’s also been unafraid to tinker a bit with the format of the more familiar film version in reprising some of the numbers, making them a discernible thread that shimmers like the lights on a darkened runway.

The music – played within the confines of a Wagon, naturally, fixed way up high – is fabulous and far bigger in sound than might be expected from a four piece, but not so overbearing as it ever drowns out the performances below.

What performances they are too. Every single actor  gives of their all, with many doubling, tripling and cross dressing for maximum effect. Patrick Brennan’s Ben Rumson, he who is born under a Wanderin’ Star, is immaculate. Forget any preconceptions you have of this character. Brennan sweats Rumson’s positivity and has very definitely stamped his own mark upon the role in a not dissimilar manner as to the way he did with Tevye last year.

Superb too as his daughter, Jennifer, is Emily Hughes. A recall from last year’s successful company, it’s pretty easy to see why. Her performance is full of wit and guile, her naivety shining bright. Oh, yeah, she can knock out a tune too. Her What’s Goin’ On Here? is an absolute delight; cheeky, charming and understated, Hughes delivers the lot.

Marc Elliott’s Julio is almost the stereotypically hunky love interest to Jennifer. Yet in Elliott’s hands the Mexican becomes a three dimensional figure exuding a depth and warmth that’s oftentimes as surprising as it is endearing.

Excellent too, particularly in her comic timing, is Emma Bispham as the forlorn, overworked and disrespected Elizabeth. To be sold at auction by your Mormon husband, then to be sold on again, might appear as being something defamatory or derogatory in today’s climes. Her performance of the whole scenario though is nothing short of what it is supposed to be: outrageously funny. Why? Because Bispham delivers the part with humour at its very heart and let’s it roll with warmth and integrity.

It would be easy to tick off the cast one-by-one, so impressive are they all – Keddy Sutton as the other Mormon wife, Sarah, amongst many other roles, is outstanding. Richard Bremmer’s Jacob Woodling is a joy and Nathan McMullen’s Irish dreamer Mike Mooney is simply superb – but space dictates.

Suffice to say Ye Haa people, The Everyman Rep are back in full swing and, Crimminy, what a show they’ve dog gone gone and delivered. Again.