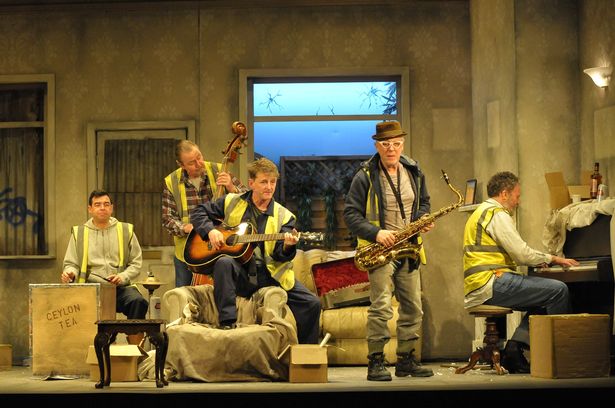 The Beast from the East may be raging outside The Liverpool Royal Court Theatre but, inside, there’s a palpable warmth emanating from the stage with Dave Kirby’s hilarious observational musical comedy, Council Depot Blues.

It’s Stan’s last day emptying houses and filling skips for the council. A day he’s been looking forward to forty forty-plus years. Yet now it’s here, he’s filled with more than a little bit of sadness. After all, when you’ve worked every day of your life, what do you do next? Who do you talk to if not your mates?

As for his work-shy colleagues, they’re all looking at Stan with envy. That is until their bolshy, blustering foreman, Harry, discovers what he doesn’t realise is an antique, one-of-its-kind instrument that’s worth a fortune and plans are afoot to get it from his grasp and so enjoy warmer climes and drinks with little umbrellas in.

Having first been staged in 2008 then again in 2011, its inevitable that things have been tweaked and tightened during the interim. As a result – under Bob Eaton’s directorship and Dave Kirby’s subtle and, when required, not-so-subtle-but-nonetheless-uproariously funny penmanship – Council Depot Blues is a much more polished production than either of its earlier incarnations.

Aside from the storyline, what really makes this show swing along at a pace is the music and the multi-instrumental skills of the cast who play and sing everything right there in front of you. There are blues riffs aplenty, many of which will have you saying ‘ah … I know this one’, right up to the point where they start to sing an altogether different, quite often rude, set of lyrics.

The cast are the usual ensemble of Royal Court regulars, with Andrew Schofield leading the way as “Chocka” Danny and Lindzi Germain, despite not having a great deal of time on stage, lighting up all that she touches. Who knew a sparkly lava lamp could inspire such mirth!?

All of the cast are superb, particularly the paranoid Jake Abraham and the over-zealous Paul Broughton as Harry. A real find though is James Nelson-Joyce who’s portrayal of Shorty – the drug-addled, Rap-inspired dreamer – is absolute comic gold.

The rule is that to make a successful comedy there should be a “laugh-a-minute”. Dave Kirby’s Council Depot Blues spoils his audiences then because, in reality, with this laugh-out-loud piece of theatre, barely a moment passes when you won’t be at least giggling.