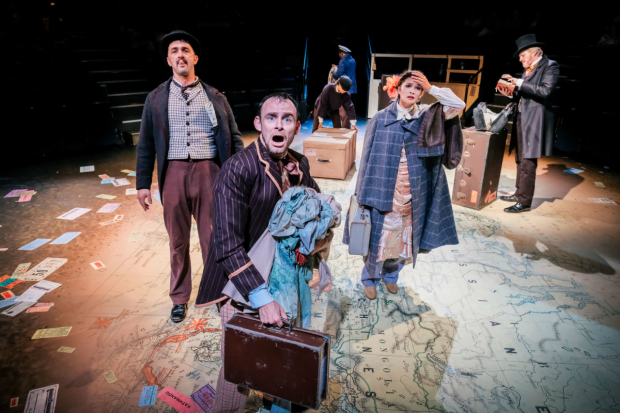 Around the World in 80 Days

This enormously fun and endlessly ingenious production of the Jules Verne classic could perhaps be more aptly entitled Across the Stage in 80 Ways, such is the sheer physicality of director Theresa Heskins’ joyous interpretation.

Phileas Fogg (Andrew Pollard) is an English gentleman of mysterious means whose every minute is accounted for with “mathematical precision”, a fact that is emphasised by the metronomic ticking of the clock throughout the first scene.  Over his nightly rubber of Whist at the Reform Club, the conversation turns to a recent theft at the Bank of England. His cronies assert that the thief is long gone and will never be caught. Fogg insists that the globe can now be circumnavigated in merely 80 days and subsequently makes a wager to prove it.

Whereupon he sets off on the very next train for the coast, taking with him his recently acquired French valet, Passepartout (Michael Hugo, honking in Gallic fashion like a veritable canard), who has a self-confessed knack for getting out of trouble.

Blake wrote about seeing “a world in a grain of sand”. This production attempts something almost as impossible – as the programme says, “125 characters, eight countries, six trains, five boats, four fights, a circus and an elephant” and all on one stage.

To say that the staging is inventive is to understate things – a marvellous magic is woven from the most minimal of props. A magnificent elephant is born of a grey sheet; a ship’s railing lists to the left and the right and the audience begins to feel queasy; we visit places as exotic as India and Hong Kong yet there is nary a scene change.

If the props are ingeniously economic, the action is not. Fabulously acrobatic, the cast fling money (with great sleight of hand) and themselves about the stage with effusive energy. The fight scenes are both honed and hilarious, the actors standing some distance apart and effecting kicks and punches to simultaneous sound effects and synchronised agonies, with both Matrix-style slo-mo and cartoonish speeded-up action. An attack on the mid-Western plains sees the marvellous Michael Hugo catching bullets in his teeth and the scene where the travellers attempt the rescue of a young Indian widow destined for suttee could very well be dubbed Crouching Frenchman, Hidden Elephant.

We career across countries and through nations with a certain shorthand of casually racist stereotypes, Frenchmen waving baguettes and excitable Italians scoffing ice cream. But, it’s alright because no-one is more lampooned than Inspector Fix (an energetic Dennis Herdman channelling his inner Basil Fawlty), the Lahn-dahn detective who is on the trail of Fogg, believing him to be the bank thief and who, in true English fashion, cannot commit to memory a name unless it’s Ango-Saxon and calls Passpartout, variously, Mr. Parsnip Soup, Mr. Pest Control and Mr. Past Participle.

Andrew Pollard as Fogg gives a fine and assured performance of a man of a certain mystery. Fogg is restrained and refined yet an optimist, a charity donor and, ultimately, a romantic. It’s tempting to say that Michael Hugo’s Passepartout steals the show, especially when he woos the audience with his fourth-wall busting serenade, but, truly, with 8 actors embodying 125 characters between them, it’s an amazing ensemble piece.

There’s a twist at the end, but not the one I was hoping for. Personally, I’d have rewritten it to have Fogg as some kind of Steampunk Robin Hood, robbing the Bank of England, disposing of the cash by doling out alms to the poor across several continents, and reclaiming exactly the same sum with his successful wager at the Reform Club. It’d be the perfect crime, the money all laundered but Fogg quids in all the same. But that wasn’t what Jules Verne wrote. What he did write though was a rip-roaring, race-against-time adventure story and this production gives you all that and more.