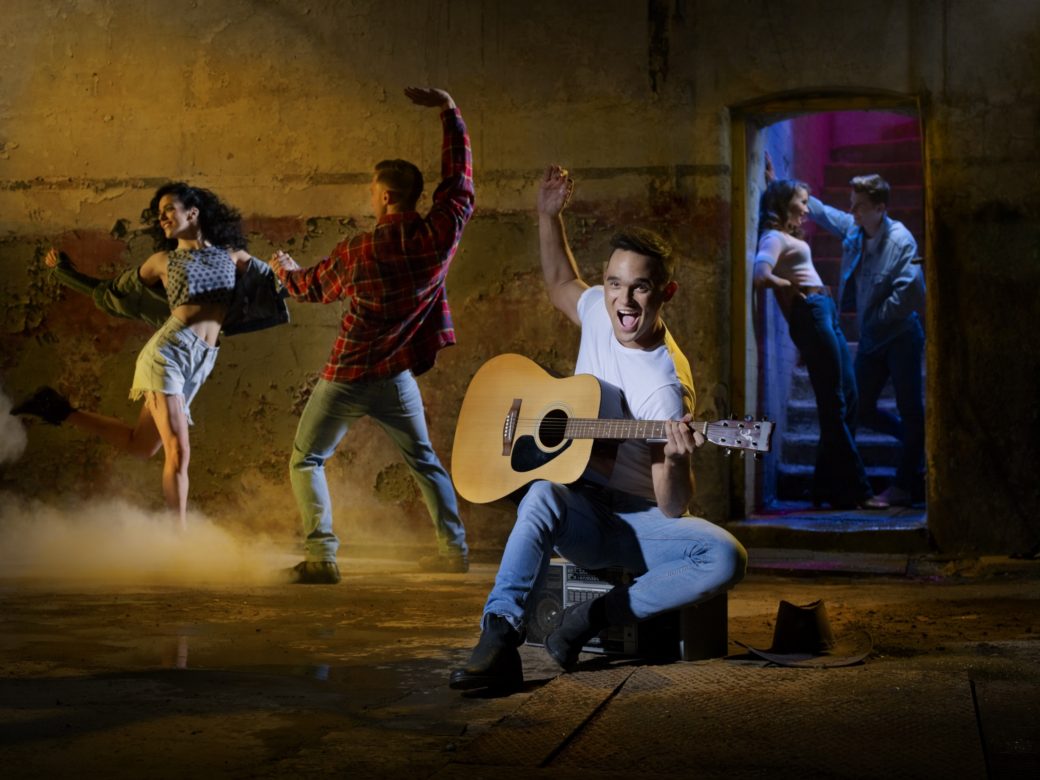 As an experiment in housing touring shows, The Liverpool Royal Court have chosen Footloose as a safe option crowd pleaser, doubtlessly thanks in no small part to the fondness held for the 1984 movie that saw Kevin Bacon’s star shoot into the ascendancy even before Apple Music was invented, and Kenny Loggins get nominated for an Academy Award for Best Original Song.

As good as the “feel factor” vibe surrounding Footloose is though – and despite the hard work the cast put into making it work – the fact remains that, really, it is all just so much hot air. Think Guys & Dolls without any semblance of a story and what you have, basically, is Footloose: sad displaced kid rolls into Bomont in Hicksville; a quiet, religious minded kind of place he proceeds to rock whilst, in the meantime, winning the girl and beating the bad guy bully boy.

As the said sad displaced kid, Joshua Owen makes a good Ren on the whole, his charm seeping out as the night progresses and his dancing ability is sharp and crisp. As nice-but-dim Willard, Gareth Gates – undoubtedly the poster boy lure for the tour – shows that not only can he sing, his acting ability is pretty good too. So’s his comedy, although its a little surprising he has a role with only one number: Mama Says (You Can’t Back Down). For a guy who’s managed to sell 5 million records+ during his career, a showstopper is the least he deserves.

And that’s arguably the problem. Outside the three tracks that are most well known – Let’s Hear It For The Boy, Holding Out For A Hero – during which Gates inexplicably strips down tight shorts, mirror shades and little else – and the title track, there’s precious little in the music to get excited about.

There’s little in the dialogue either and both Maureen Nolan and Reuben Gershon, Vi and Reverend Shaw Moore respectively, come across as not so much pious as bored by the rules they’ve imposed on the town as the youth of Bomont are. The same, however, cannot be said of stand in Ariel, Grace Lancaster. With more zip and bling, zest and bravado than almost everybody else on stage, hers is a saving grace performance to savour.

With much of the music being performed by the cast between scenes, it gets to feel a bit like a Rock ‘n’ Roll panto after awhile, but without the jokes, the water or, indeed, the spirit. Which is a shame because, at the end of day this Footloose turns into a great big bag of candy floss: a whole lot of colour but not a great deal substance.

To Read Our Interview with Gareth Gates Click HERE