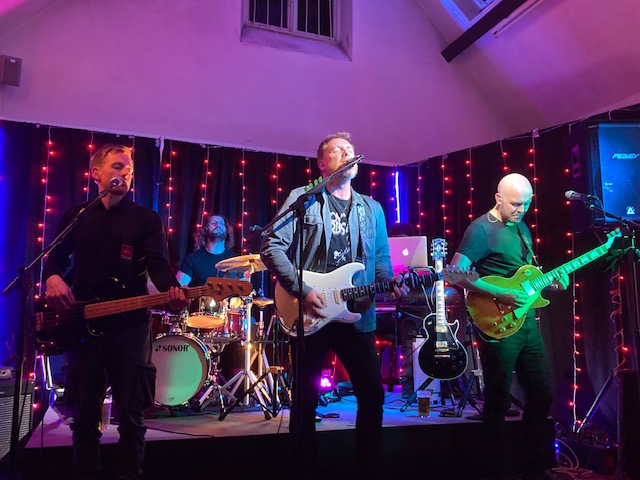 Some things will not be denied. The fact that Paul Dunbar & The Black Winter Band were finally able to take to the stage of the Thornton Village Club, after nearly three years, a pandemic and an injured drummer after their last visit, says as much tenacity and patience of this fabulous venue as it does the anticipation of those waiting to experience something so special.

Acoustic guitarist (and keyboard player for Dunbar) Olly Neash got things off to a gentle start. A beautifully delivered set that underlined his burgeoning reputation on the Liverpool pub & club circuit.

Next up, Shoulder the Sky: an altogether different sound, vibe and energy. These guys are loud and their EP, Good Thing Going On, shows just why they’re getting their name noticed on the Rock scene locally.

Paul Dunbar & The Black Winter Band are who the majority have come to see though. The bluesman is the epitome of superb musicianship and his laid-back, almost pleasantly shy demeanor belies the beast of a guitar-playing monster he can be.

Dead Inside is the opener, as it is on the latest album Changing Faces. A toe-dip in the water, something to ease the crowd in before completely tearing the place apart. Siren  is a supercharged rocker, with The Black Winter Band lending full volume to proceedings faultlessly

Dunbar’s vocals, all broken glass, and smooth, smooth dynamite, rip through the sentimentality and hammer home the anger, hurt and betrayal – oh, yeah, and the love – he has for the subject matter of his songs. 1 in 7 Agree is a real highlight, whereas Ballad of Four Eyes could make the bottom lip of many a hard man tremble with its sheer beauty. It’s Made My Peace With You in and of itself, though, that shows a master craftsman at the very top of his songwriting game.

Yet it’s not until the encore and Earth, Sky Or The Raging Sea, and the tub-thumping anthemic blast that it is, has the crowd truly out of their seats and baying for more. Paul Dunbar is a consummate musician, yes, but he also knows what it is to entertain. Contort Yourself closes the night on an absolute high.

Paul Dunbar’s return to this mysteriously hidden gem of a venue may have been long in the realising but, boy, has it been worth the wait. Fabulous stuff indeed and all for just £8!! Live music at its very, very best!